Chennai, after Bangalore and Hyderabad seems to have recently undergone an invasion of cold-stone ice cream joints.

Personally, being a fan of cold stone ice creams I couldn't miss this one and decided to try it out during my weekend trip home.

Ambience (2.5/5)
Benchmarking it to its peers, I feel the ambience is less appealing. But on a standalone judgement they might not fair too bad.

The ice cream sandwiches and bars which were stored in the refrigerators did not look inviting.

Pricing (4/5)
They are priced reasonable and two large sundaes cost us 350 odd. Thats reasonable especially considering the pricing of competitors.

Service (3/5)
The ice creams were served pretty quick. The staff could however be better equipped in guiding customers with the selection; especially considering their extensive offering.

Ice creams (3/5)
1. Rock with Ferrero rocher
Even though it might not figure in my list of favourite cold stone ice creams, this was definitely good stuff.

2. Oreo double double
A complete contrast to the previous order. The ice cream was too sweet and had nothing oreo about it. Would not recommend this order. 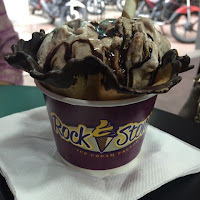 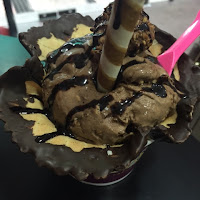