Momo's and Manali are almost quite synonymous. Every second joint in Manali sells momos and no wonder everyone I asked, suggested me to try momo's when I was there. I happened to try them at two places, both centrally located in the Manali market place.

The first place we went to was a restaurant called Mountain View . We tried both the fried and steamed varieties and also had some Chinese soup. Personally I prefer fried momos and they tasted fabulous.

The other restaurant we went to was Chopsticks. This time around we were in the mood to get more exploratory with the Tibetan cuisine. For a person who was trying most of these items the first time, I must concede the names did sound funny. However I am surprised they got etched in my memory. The new items we tried were Ghenthuk and Thenthuk. Both of these were noodles with a soup base. While genthuk was fried noodles with a soupy curry, thenthuk had something similar to a pastas in a similar soupy curry.

Though it was a wonderful opportunity to explore Tibetan cuisine, for a person who prefers spicy food it might not be a preferred dish as most of these items are prepared with minimum spices. Nonetheless, they are surely something you should try for the balance in nutrients it possesses. 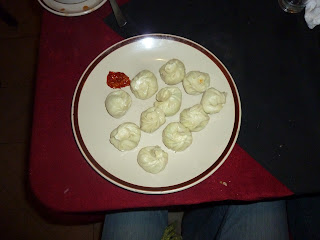 Paragliding had three courses of varying length. The longest option was from a hill top and looked really interesting. The best part about this course was one could also get to experience the cable car as the ride up to the hill top had to be using the same. Unfortunately for us, the climate change wouldn't permit us to take the long course so we had to content ourselves with the medium option which I bet was no less fun for a first timer.

The cable car however was a big disappointment. In my search online I read the Gondala (Cable Car) had a 500meter rise in its 1.3 km course. This sounded fancy more so because cable cars is something that has been showcased in our movies from the early 80's and I had great expectations from it. This was not something worth paying Rs.500, also there was no scope for negotiation as it was run by the government functionary. However as a tourist this is something you might want to do especially if your group consists of people who are there for leisure more than adventure and also in case you want to catch a glimpse of the beautiful view from the mountain top.

Other than this you can find a small carnival of sorts for kids along with rock climbing courses, ejection bungee and other similar activities that you find in usual adventure zones. To sum it all up, this is a must visit location in case you visit Manali as it offers a complete package for tourists across demography and interests. visit in the month of June there was no snow cover. However the adventure enthusiasts could reap some fun as there was paragliding apart from the government initiative cable cars.
Posted by ajit.induchudan at 12:53:00 AM 1 comment:

I got a chance to visit Kullu-Manali, one of the most famous summer retreats in India. Located in the hill state of Himachal Pradesh, this is one of those places which is a must visit for the young and adventure savvy. Their adventure activities in addition to the regular doses of trekking and mountaineering include skiing, ATV's, paragliding, river crossing and several others.

The travel route we chose from Chennai was to take a train to Delhi (Nizamuddin Station) from Chennai Central. There are several train options, some of which may get you to Delhi sooner than 30hrs from departure. Manali is a further 15hrs travel (approx) from Delhi. There might be wiser travel options en route Chandigarh and others which you may opt depending on your budget.

The weather in Manali according to my I Phone was a max of 33 degrees and min of 13. Though one might assume that this is not really cool by hill station standards, the maximum temperature is witnessed only during daytime and temperature drop is evident between late evening and early morning hours. During winters there is heavy snow fall and several places might not be accessible. This makes summer and months extending up to September the ideal time to visit Manali.
Posted by ajit.induchudan at 11:56:00 PM No comments:

This blog of mine is exclusively dedicated to food and travel, two of my biggest passions. In this blog you would find posts about a few of the places I have traveled to and several restaurants and food joints which I have visited.

Talking about myself, though a outright foodie I am predominantly a chicken-o-maniac. This means most of the non veg dishes I try might be variants of chicken. In case you are one of those red meat or sea food lovers, I am not sure if this blog would be of much help to you. However considering my South-Indian upbringing, vegetarian dishes and pure-vegetarian joints would figure in my suggestions.

Enough about myself, let’s get started!!!