Bangalore was lucky to host one of the biggest food connoisseurs of all time, restaurateur, chef and master chef Australia judge - George Calombaris.

During his visit to the city, he explored the local cuisine and had two invite only sessions with foodies and food bloggers. Thanks to Zomato and my untiring passion to review restaurants - I got an invite for one of these sessions that was held at JW Marriot, Lavelle Road - Bangalore. Other invitees for this event included CxO cadre employees of some of the leading corporate houses operating in Bangalore and few of the top Zomato and food bloggers from Bangalore.

My experience:
It was my first black tie food event and was a great opportunity to meet and socialize with some of the corporate heads and my fellow foodies from Bangalore.

George Calombaris
Before I talk about the food, I would like to say a few things about the man himself - George is extremely passionate about food: while typing this, all I can do is visualise the way he describes food - his narratives could stimulate hunger in you even after an Andhra meal.

Otheriwise, he seemed hardworking, friendly, funny and above all level headed despite all his achievements.

Quoting and unquoting a few things he said during the event: 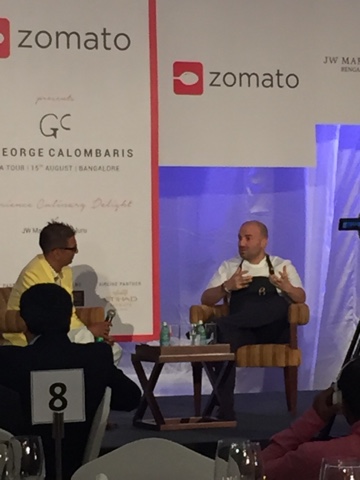 1. George - My son went to a fast food joint for a birthday party and he took his own food

Well, with a chef like this at home who would want fast food? More importantly, this is in line with his principles on how most fast food joints do not offer healthy food - a cause he has stood up for in one too many public forums.

Clearly George had his share of South Indian food and fell in love with it. He described the south Indian vada as a savory donut.

3. George - I worked with Gary in 1996 and he hates the fact that the apprentice has overtaken the master.

Said in light vein, he loved to take a dig at people that are close to him.

4. George - Matt's knowledge of Indian food is better than the Indians I know

Only thing running on my mind was - when can we get to see Matt? :D

Can George handle the real Indian spicy food? I am sure his love and understanding of food will help him deal with it. He might turn red eating, but would be a happier man after the meal.

The Food:
I had given my meal preference as non vegetarian and though I am usually averse to trying non-chicken dishes, considering the rarity of such opportunities decided to have an open mind to trying all meats. This was one of the wisest food decisions I have made as I thoroughly enjoyed the uniqueness and quality of each of the dish. Have detailed my view on each of them below:

1. Beetroot - feta - papadom and yoghurt
Not a big fan of beetroot, but cleaned this dish up, The ingredients of the dish combined well together; but for somebody like me who has eaten papadom all life, the semi-raw papadom was a marginal spoiler.

2. Sea Bass, miso, eggplant and celery
I was among the lucky few in the table to have got a tender and skinless piece of the dish. It was mildly flavored for an Indian palette and tasted pretty good. The unlucky ones had some difficulty in cutting dish.

3. Green Greek Salad
The green greek salad with peanuts was fabulous. George recommended that we try this dish with Naan's and I was pleasantly surprised on how well they combined.

4. Prawn Saganaki, tomato and mustard
Soaked in olive oil this dish looked like a dumpling of sorts and was filled with fresh and well cooked prawns. The prawn by itself had no special flavors, but it was yet another dish which combined flawlessly when eaten together. Was my favorite dish of the day!

5. Lamb, onion, fondant potato
The lamb was cooked semi-rare and considering my limited experience in eating such preparations I struggled in cutting the dish. I always wondered how could someone eat rare and semi-rare preparations and this dish answered that question for me. Enjoyed the meat!

What made the dish better was the lamb puff - it just melted in the mouth.

6. Dessert - rice pudding, salted caramel and rice cream
A mix of sweet, bitter, crunchy and gooey - this was one of best non-chocolate desserts I have had ever. Liked it so much that I almost had a heart attack when I saw somebody waste it.

Most of these dishes were served in small to medium size portions and by the time I was done with the meal I felt quite stuffed. A perfect six course meal and one I would have to wait another lifetime to eat again.

Thanks Zomato, Goldrush Events and JW Marriot for making this possible. 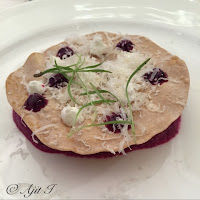 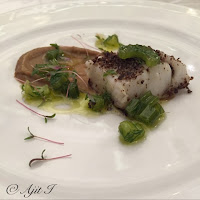 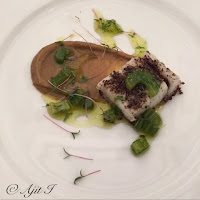 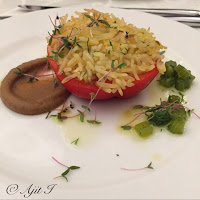 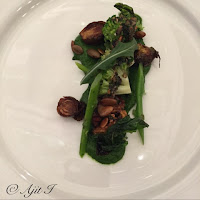 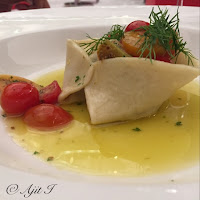 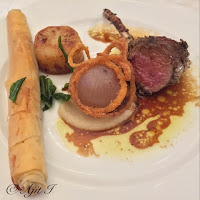 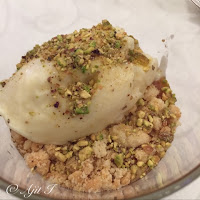 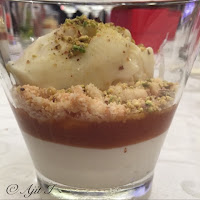