Beyond Madras at The Dining Room, Park Hyatt - Velachery, Chennai (4/5)

This review is based on a meal on the house for which I was invited with my family. We were invited to try their South Indian Thali and the moment the PR mentioned that I realised it was my kinda thing. But however, considering a few recent experiences in some other prominent restaurants, I went with no great expectations.

Ambience (4/5)
With a moderately dim yellow lighting, the restaurant has a huge dining area. A part of the dining area (where we sat) had the open kitchen on one side and on the other side was the exit way to the open area facing their much hyped flying elephant outlet.

Despite the busy preparation scene at the open kitchen, it was no nuisance to the customers whatsoever - that is commendable.

The other dining area seemed much larger and was located further away from the entrance.

Service (4/5)
The staff were very informed about the dishes and pleasantly obliged to all our requests for refills. The staff also made sure we at least sampled the some of the delicacies that we might have otherwise skipped, for the thali was overwhelming for a dinner.

Refills came quick and also clearing of dishes were spontaneous.

Pricing
Since the meal was on the house, I would prefer not to score them on this factor.

However, their thali is at a slight premium to similar restaurants in a few mid segment 5 star hotels and much economical than the expensive ones. 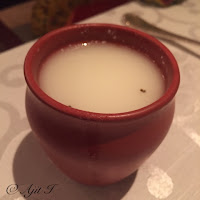 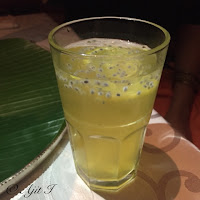 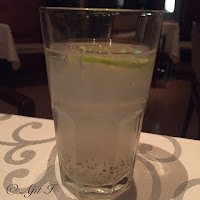 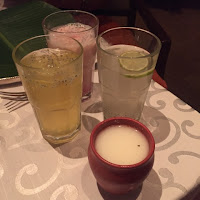 Since we were four of us, got one of each to try. All of them were of good standard, while the rose milk stood out for me - might be on account of my inherent liking for the same.

1. The sabudana vada which was less impressive on a standalone basis, tasted good when consumed with the chutney.

2. The paniyarams were good in the first round, but came out excessively oily when we went for a refill.

3. Nethili fry
Was standard. Since my brother (the only other non vegetarian in the team) and myself are not big fans of the same, the restaurant made a good gesture of serving chicken tikka's as substitute.

The tikkas were delectable. 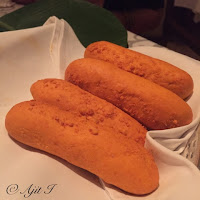 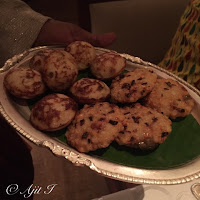 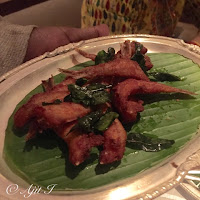 Main course (3.5/5)
The thali was quite overwhelming considering the extensive options it is served with. I had limited appetite for vegetarian items in the thali and my views on the same are based on samples/small portions. 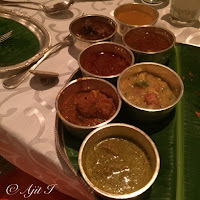 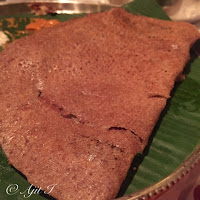 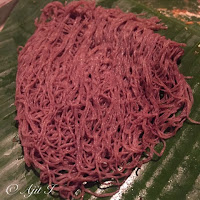 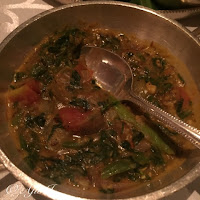 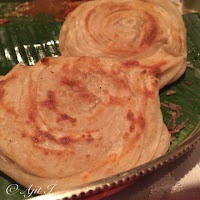 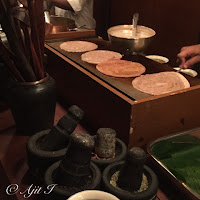 1. Dhaniya dosai - was healthy and crisp. But I rushed through this to the other offerings, which I prefer over dosas.

2. Ragi idiyappam served with coconut milk
On a normal day, I would run away from a ragi idiyappams. But this, was one of their simplest and finest offerings. The coconut milk was perfect with its thickness and sweetness quotients and the ragi idiyappams tasted brilliant when soaked in the same before consumption.

3. Parotas
The parotas combined well the nilagiri chicken and lamb curry. However, it did not live up the flaky description it came with and could have been made better.

Since I love parotas, I had quite a few despite the flaws.

4. Aapam
Fine aapams, but the bread lost its curves before plating. I know that doesn't sound right, but there is no better way to describe it.

Curries (3.5/5)
1. Lamb chettinad - had delectable and soft meat cubes and a fine and thick masala.

2. Nillagiri chicken curry - this was a non spicy gravy and combined well with appam and parotas.

3. Fish curry - reminded me of one at a mess that I love, though a little thicker. Couldn't enjoy much for lack of appetite.

Veg curries:
Most of the veg curries would have best combined with white rice or the coconut rice (which was served later).

Paruppu urundai kozhambu was something I did not enjoy. The urundai was too thick and dry, and the gravy refused to penetrate

Rice item
Coconut rice - with limited or no appetite left, I had to limit my consumption of this simple yet brilliant offering. The only possible reason I could enjoy some of their veg curries was this rice offering.
Dessert (3.5/5)
First look and I thought I should give the desserts a miss; for it had all those items which I usually skip in the desserts. However, tasting them was a decision I would not regret.

2. Banana cake
Was passable. Though it did do justice to the banana name in the flavour, its a dessert I would give a miss. The cake was denser than how I expected it to be.

3. Sakkarai pongal
A sweet that I usually avoid for its overdose of sweetness, but enjoyed here. With rich ghee infusion, this had a fine balance of sweetness and was to my preference.

Others in the group did not quite agree with my views on the sakkarai pongal as they believe it needed to be more sweeter. 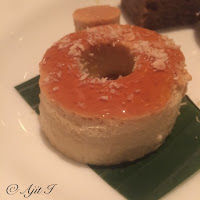 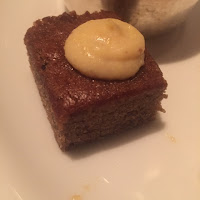 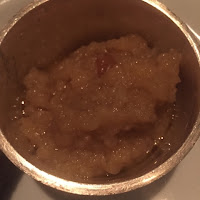 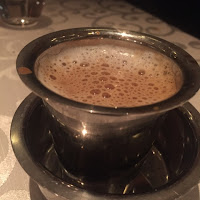 On a summary note: An expensive, but elaborate thali offering by one of the premium hotels in the city. With several fine dishes and some healthy twists, it manages to stand out from its peers for the unique offering. Check it out!
Posted by ajit.induchudan at 1:19:00 AM